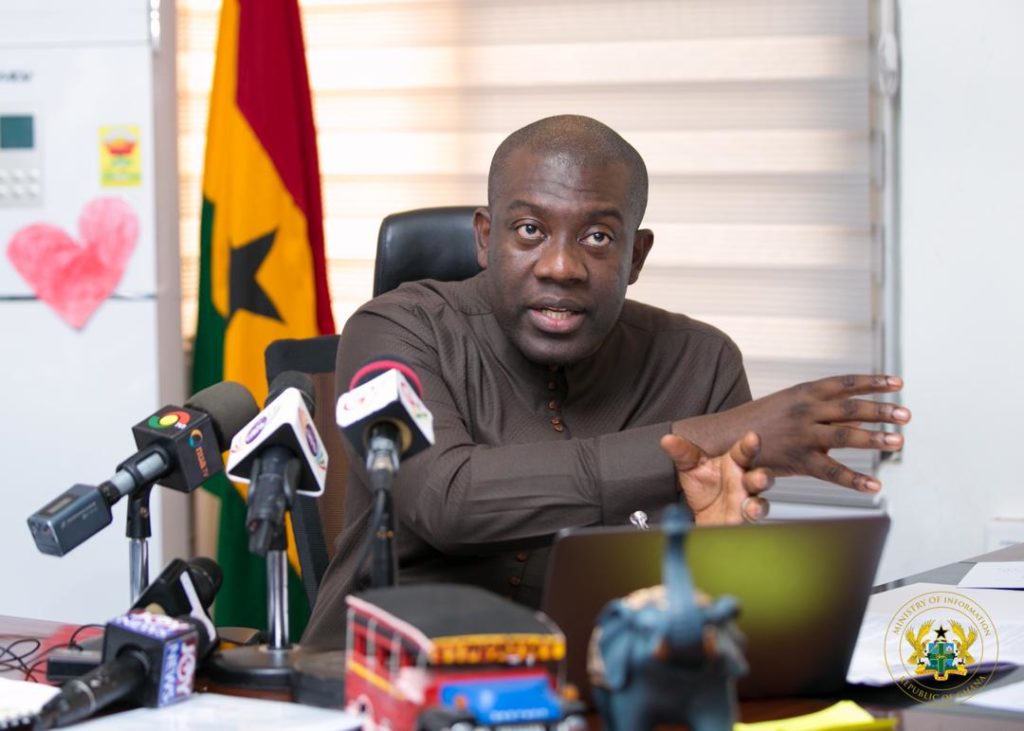 Government has hit back at the opposition NDC over claims that the ruling party has only achieved about 14% of its manifesto promises.

Addressing journalists in Accra on Monday 15th June 2020, Minister for Information, Kojo Oppong Nkrumah described the claims by the NDC as distortion of facts, “one that the leading opposition party is engaging in to serve their own parochial partisan interest”.

Mr. Nkrumah slammed the opposition party for parading dishonesty about the current state of affairs.

“As we get into the 2020 national conversation period, one of the narratives that the NDC seek to carve is a narrative of dishonesty and in order to give life or credence to that narrative, they have to create scenarios that if indeed we made 388 promises, they will find some ways of adding some 235 and claim that we made 631 and in the end say therefore that we have been dishonest”

He said part of the NDC strategy is increasing the NPP’s promises from 388 to 631 to enable the opposition party make a claim of dishonesty against the Akufo-Addo administration.

“They make this argument because what they seek is to downplay our achievement as a country and as a people” he added.

The NDC in the third edition of their weekly press conference earlier today rated the governing New Patriotic Party (NPP) 14 percent in their manifesto promises prior to the 2016 general elections.  The press conference which was led by Samuel Okudzeto Ablakwa described government’s accomplishment of its promises as woeful.

Responding to the claims, Mr. Oppong Nkrumah who is also Member of Parliament for Ofoase Ayirebi stated that “what they have always forgotten is that if Ghana succeeds, and the Government of Ghana, regardless of which administration is in power, gets the credit, it insures to the benefit of all Ghanaians including them. When Ghanaian leadership is respected and appreciated across the continent or the world, they too, regardless of their partisan political color benefit from the collateral credit.”

The Minister however admonished that despite this year being an election year, the country should be focused on conversations that will help bring development.

“We are clear in our minds that this year being an election year, despite the expectation that our attention as a nation even on politics should be focused on leadership in times of crisis, it comes as no surprise that the group will resort to such attempts. We do not belief that Ghana’s progress record should be undermined in those attempts to be partisan. Government assures the people of Ghana to set and defend the nation’s record of growth straight even in this trying times” he added.